JLB hits the virtual stage, delivering a jamalicious show on a steamy night.

First set kicks off with a long “Shakedown Street” which slides effortlessly into a bouncy “Suzy Greenberg.” With The Grateful Dead and Phish represented, the band moves into original territory for the remainder of the set, delivering some nice long jammed out versions of “Saw Mill River,” “The Freeze” and “Englishtown.” An energetic “Still In Luv With U” cascades into the set ender, a solo guitar piece from Jed Luckless called “Meredith.”

Set two returns to the Dead and Phish realms, opening with a rockin’ “Sand” and featuring a twenty-three minute “Fire On The Mountain” > “Sugaree” combo. Plenty of original JLB is also in the mix, with a nice version of the uplifting “Celebrate Instead” and a long “VOTR.” A busted string forces Jed to switch to  a stratocaster for the crowd requested encore, “U.S. Blues.”

Also included in the recording is the soundcheck, the Neil Young tune “Ohio.” A fun show from the JLB with some nice jams and some song surprises. Enjoy! 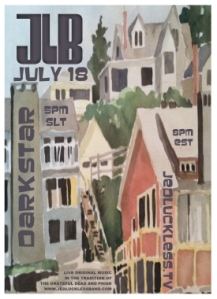